Microsoft getting closer to Cloud Crown

In 2019, you can’t label Microsoft as just “the Windows company”. The necessary revitalisation of Microsoft in this new era of tech firmly indicates that services matter more than software licenses. The most vital force behind all of this is Satya Nadella, who took over as CEO in 2014; and since then he has fundamentally shifted Microsoft’s business to build the 43-year-old company bigger than ever before.

Microsoft’s success appears to be a dark cloud hovering on the throne of the biggest cloud provider; which, for a long time, has been Amazon.

The rapidly growing, and apparently stable, cloud-service business helped in Microsoft’s resurrection. Although, Microsoft breaks down its business into three categories:

Let’s look at some numbers 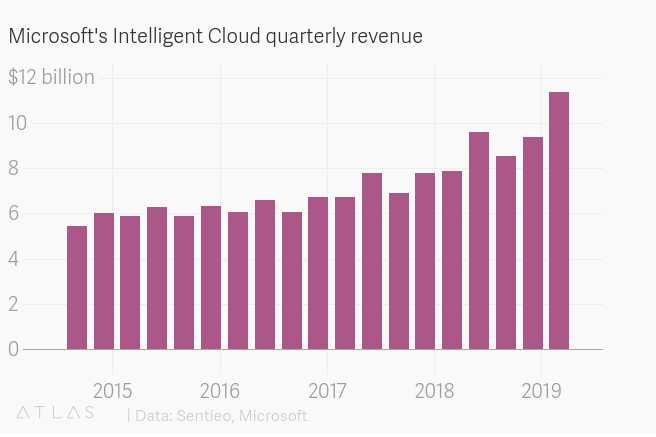 Microsoft services in all three categories saw growth over the same period last year. What makes this growth more exciting is Intelligent Cloud’s staggering contribution. For the record, Intelligent Cloud revenue was $11.4 billion in the fourth quarter of the fiscal year 2019. The revenue growth clocked the jump of 19% over the same quarter last year.

Since the beginning of the year, Microsoft’s stock reached 38% high at $140.

The numbers prove the growth that Microsoft is said to have achieved but what instigates the most is the deals that Microsoft securing under its Azure umbrella.

LinkedIn, this week, announced their strategic decision to migrate on the Microsoft Azure public cloud. The move comes after the exponential growth in the number of members to 645 million. The number hiked almost 50% from the time when it was acquired by Microsoft in 2016.

LinkedIn has maintained its own data centres but felt the need for public cloud as the next milestone to reach would be 1 billion members.

The business social network represents about 5% of Microsoft’s revenue. Its inclusion as an Azure user will add more value to Microsoft’ cloud ecosystem.

AT&T and Microsoft announced a strategic alliance worth more than $2 billion. AT&T will move its employees to Microsoft’s package of productivity apps and security services that too using Azure infrastructure.

To chase AWS in the cloud infrastructure market, AT&T proves to be a sturdy buyer, a prestigious and recognizable brand with significant demand for storage and computing services to fulfil the needs of more than 250,000 employees.

Last year in November, Gap Inc. announced the crucial deal with Microsoft for public cloud services as part of their “broader digital transformation effort”. Gap plans to move its inventory and e-commerce sites to Azure in multi-year deployment.

Microsoft getting more cloud deals are not only to achieve the profit margins but also to be competent enough in this cloud era with global brands trusting Azure as a reliable cloud vendor. Microsoft’s “larger and longer-term agreements” set to make it a more established cloud operator.