All the announcements from Andy Jassy’s keynote at AWS re:Invent 2019

The first week of December, came with the biggest cloud event of the year – AWS re:Invent 2019. This was AWS’s 8th annual event with more than 65,000 attendees, making it the Brobdingnagian (meaning “gigantic,” to put the entire event into words, we needed a word like this) than ever. The highlights of this gigantic event are always keynote sessions. So, for obvious reasons, you can’t miss the keynote announcements from AWS re:Invent 2019.

Most awaited keynote at AWS re:Invent 2019

Andy Jassy, CEO at Amazon Web Services, has always been at the core of AWS. His leadership has brought AWS to a position that cloud and AWS are now synonymous. The attendees were also waiting for the CEO to take the stage to bring all the major announcements.

Andy Jassy’s keynote featured plenty of news about new cloud products, services, and also music. The live band played a range of music to take the excitement of the conference on a higher note. 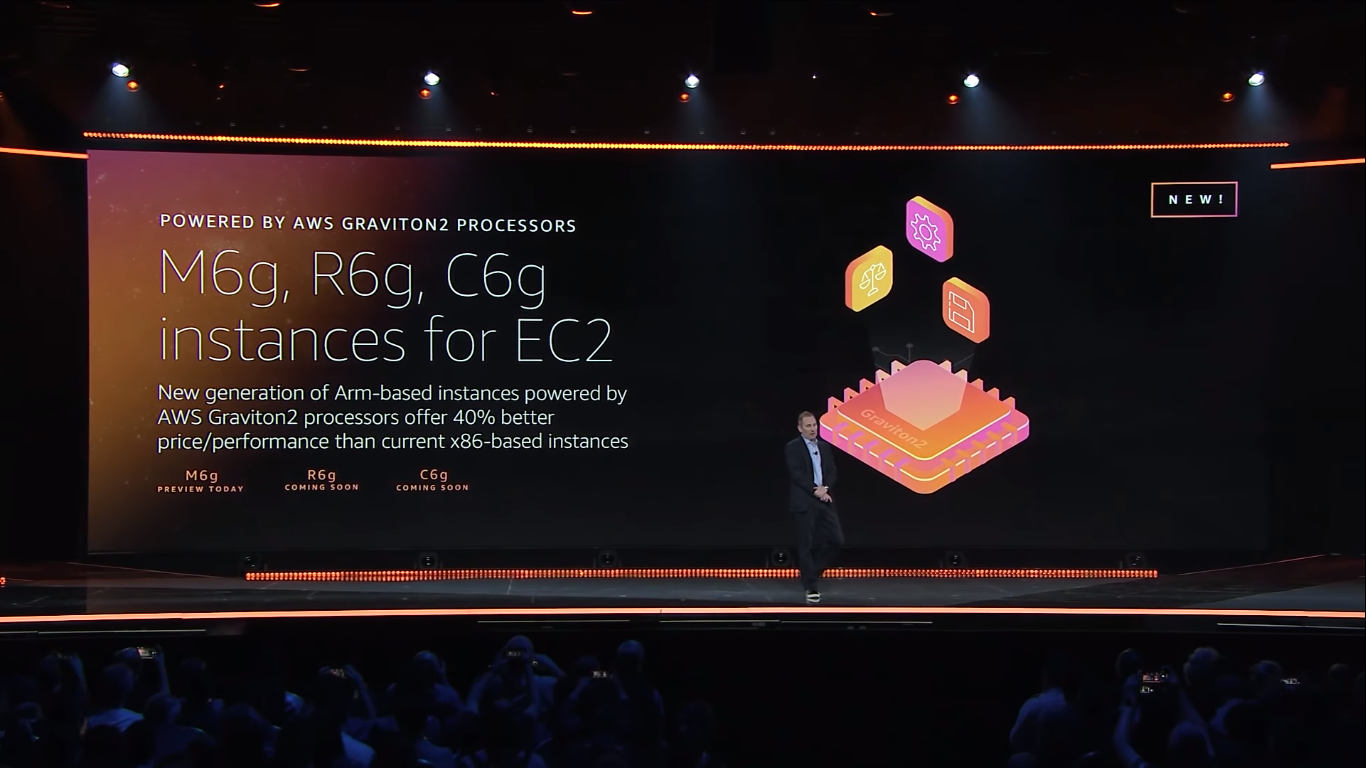 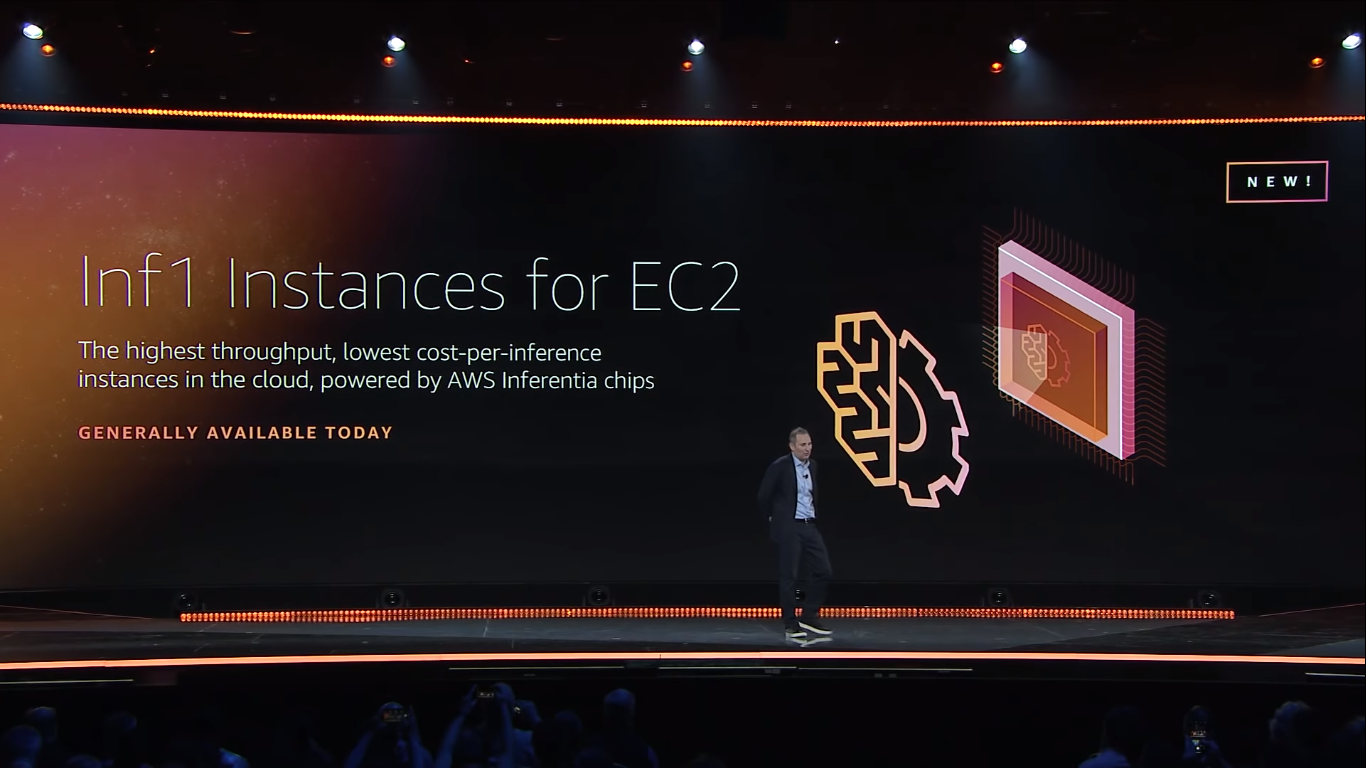 Users can get the highest throughput using Inf1 instances and lower cost-per-inference instances in the cloud.

Andy Jassy said over 85% of Kubernetes runs on AWS. For a fact, Fargate is the only compute engine that allows users to focus on managing containers without having to worry about provisioning and managing servers. Now, Kubernetes customers have access to all of the benefits of running containers in AWS based on the serverless technology of Fargate.

Big data has reached every industry. Andy Jassy pointed out how organizations need to bring transformations in the world of big data. Regardless of the industry and the complexity of your cloud infrastructure, AWS has almost everything to offer. As one of the first players in the 21st-century cloud industry, AWS has inherited and built an in-depth set of services.

Andy Jassy announced the general availability of Amazon S3 Access Points. It simplifies managing data access at scale for applications using shared data set on S3. Users can easily customize access permission rules for each of their applications and create hundreds of access points on a single bucket. 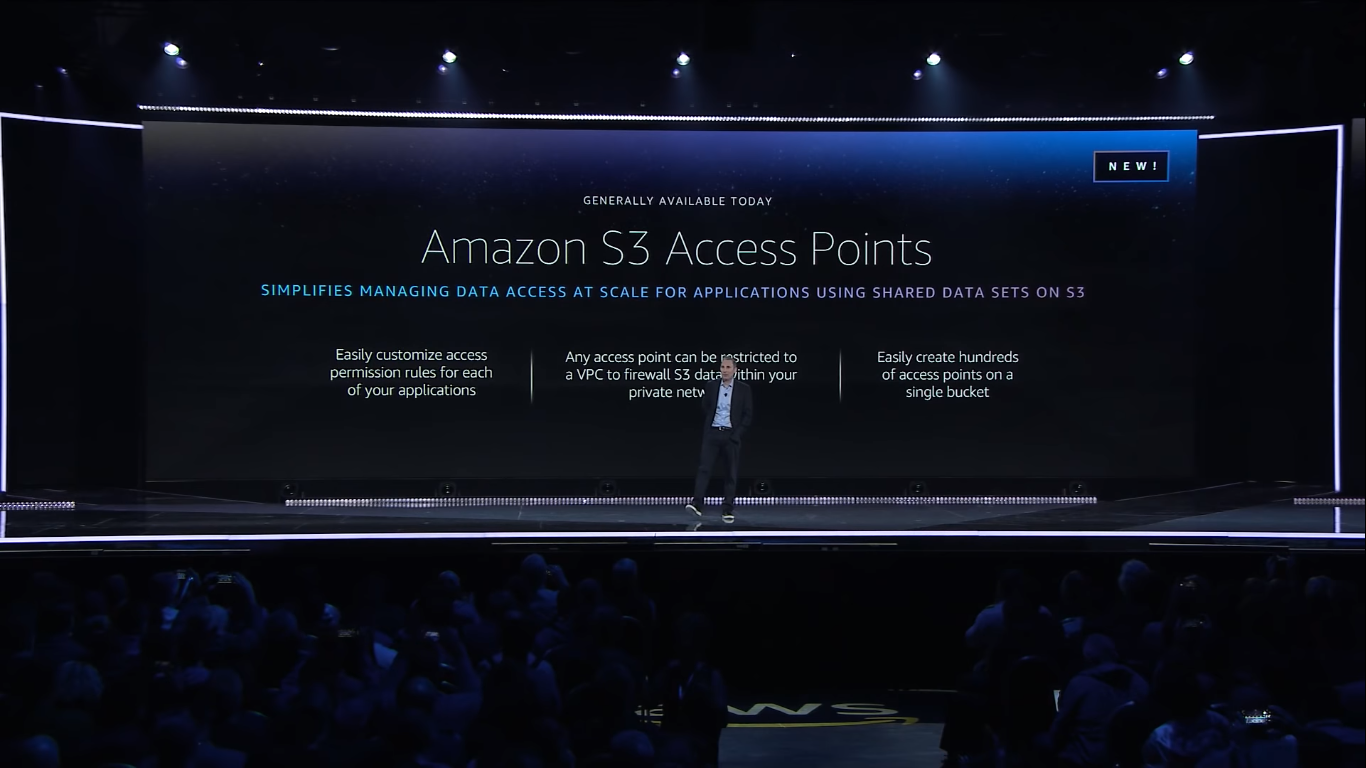 Amazon Redshift is one of the most popular services offered by AWS. Now, AQUA enhances all the capabilities of Redshift. 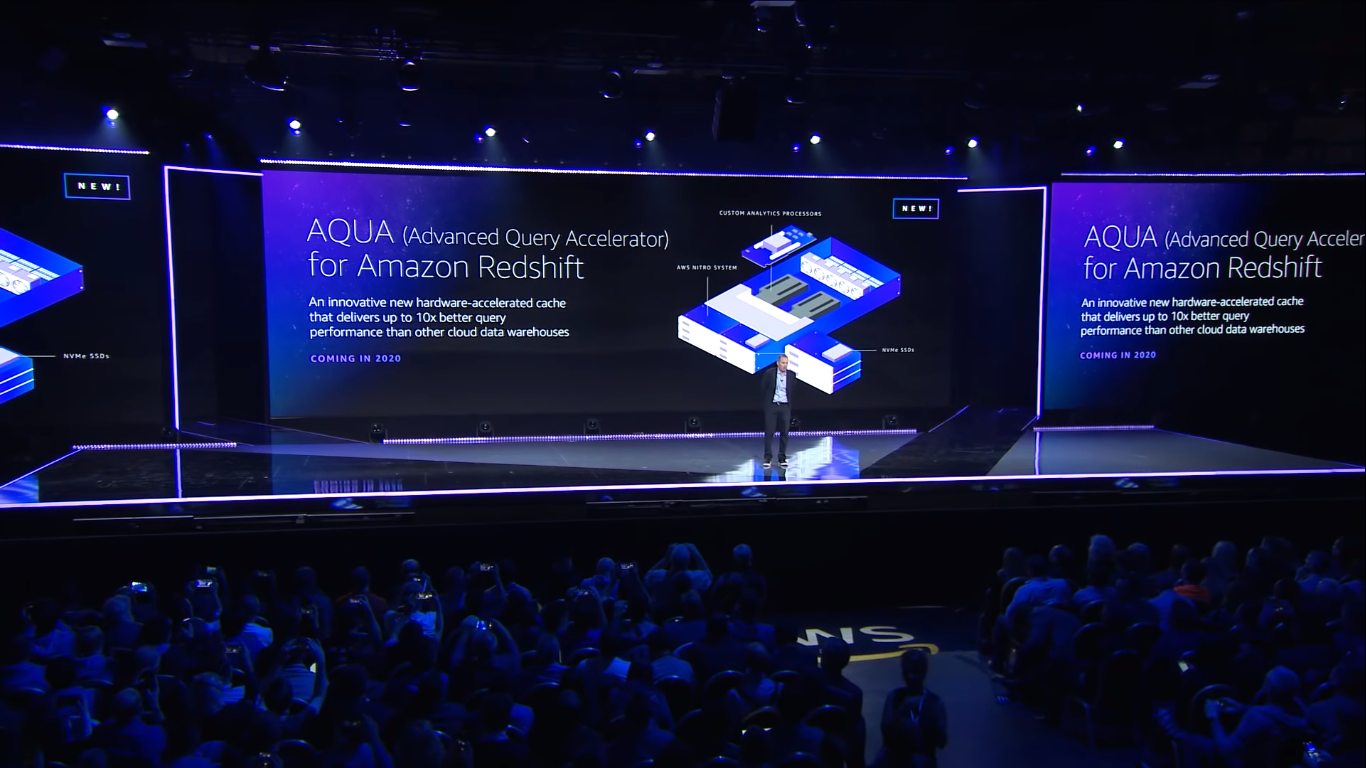 AQUA is an innovative new hardware-accelerated cache that delivers up to 10X better query performance than other cloud data warehouse. It will be available in 2020.

We all know storage in cloud is one of the best ways to handle and access your data at different locations easily and with low latency. But the major problem is the cost. Storing data is expensive at scale, which often prevents a user to use a spectrum of services to analyze that stored data. 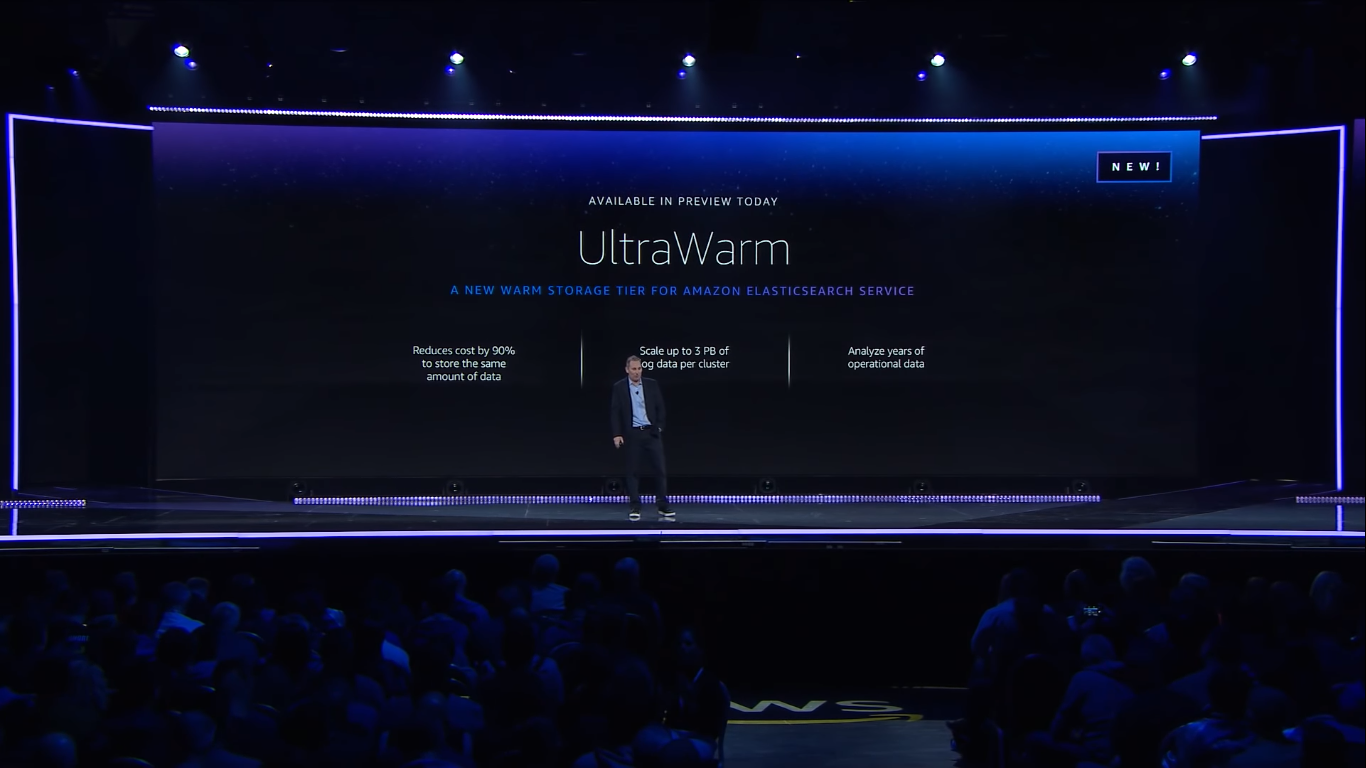 UltraWarm solves all these problems by reducing costs by 90% to store the same amount of data. Users can scale up to 3 petabytes of log data per cluster and analyze years of operational data.

Andy Jassy pointed out that a large number of customers are using Cassandra service but facing the issues when it comes to scalability. Amazon Managed Apache Cassandra Service is operating Cassandra at scale. It prevents the need to any cluster and at the same time offers single-digit millisecond performance at any scale. 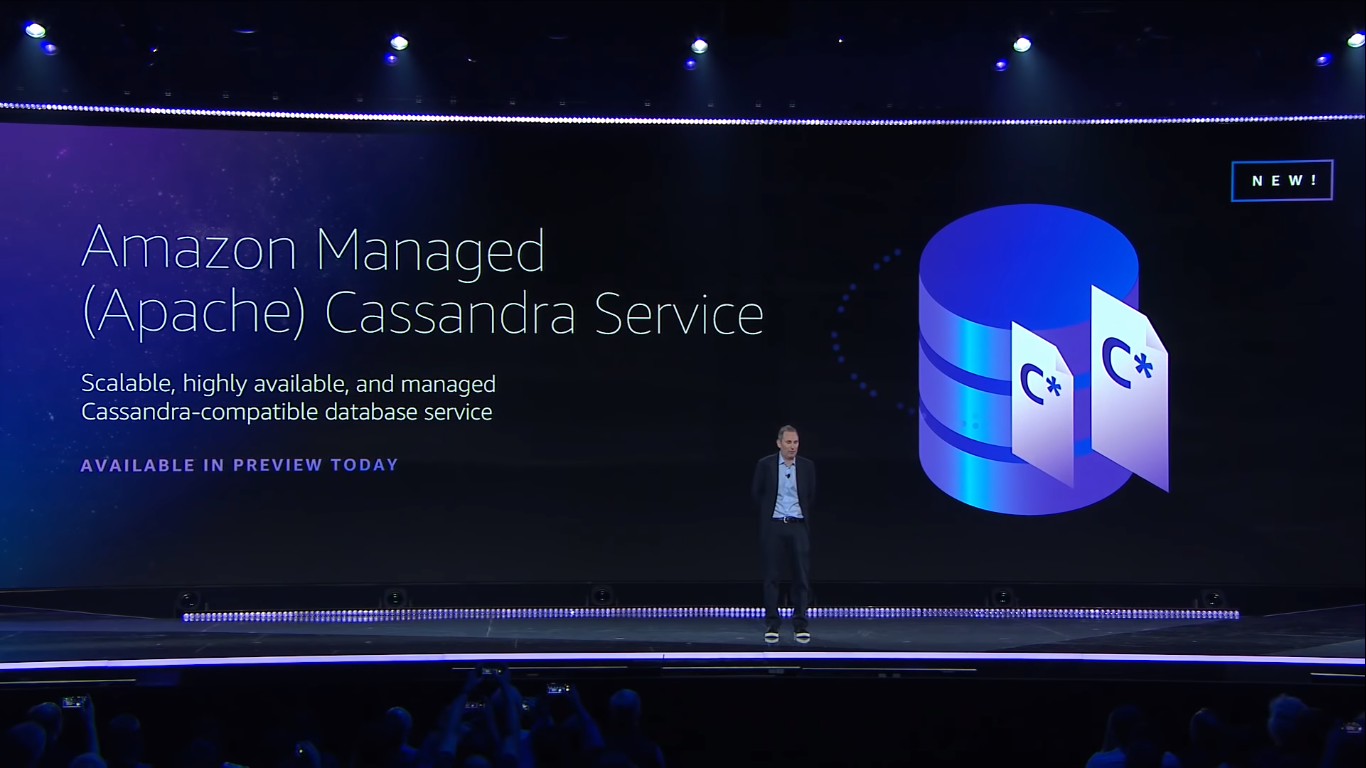 Suggested Reads: Top 7 announcements from AWS re:Invent 2019 that made headlines

Last year, AWS Outposts was one of the biggest announcements. These are the ready-made physical hardware racks used in AWS data centers ready to deploy at any edge location. Andy Jassy announced that AWS Outposts is generally available now being served in preview mode for the past one year. 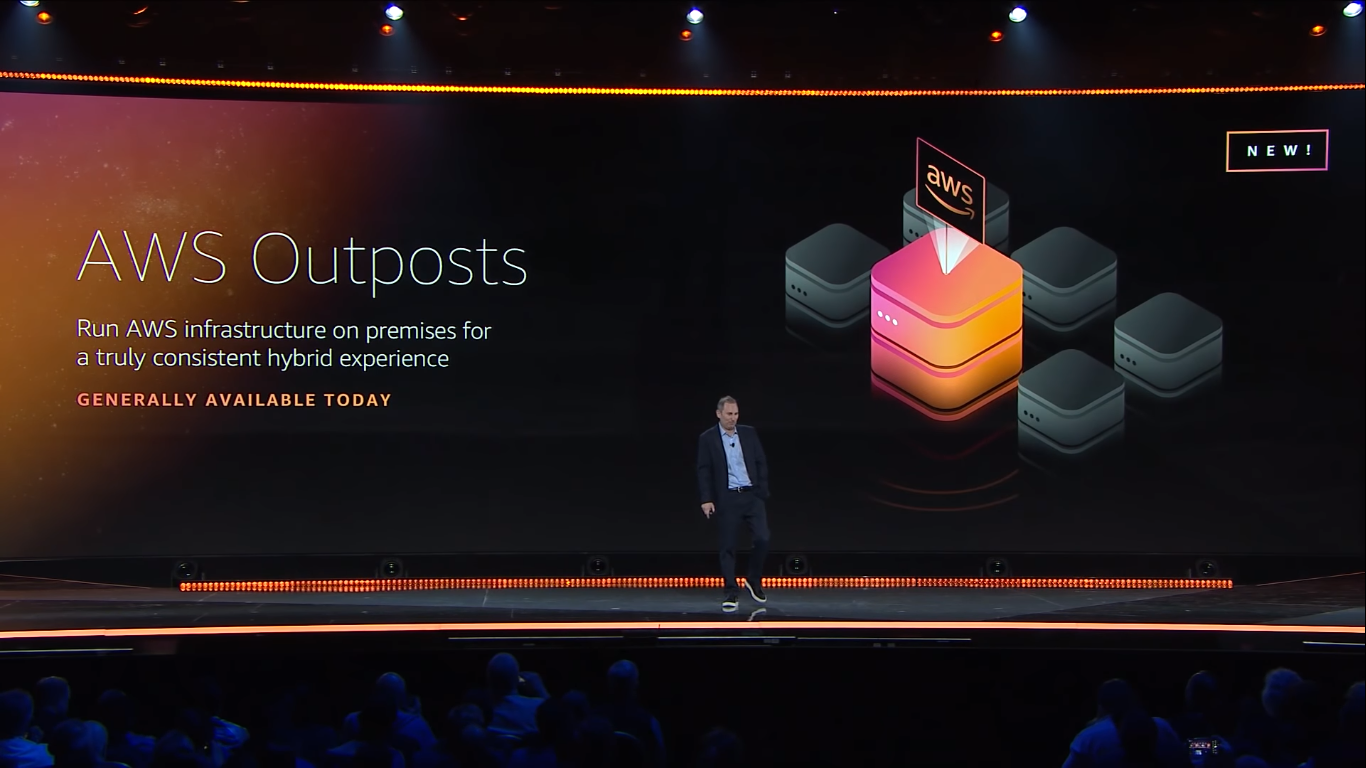 A new type of AWS infrastructure deployment will deliver single-digit millisecond latency to the end-users by placing compute, storage, and database services close to metro areas. At present, AWS Local Zones has general availability only in Los Angeles. 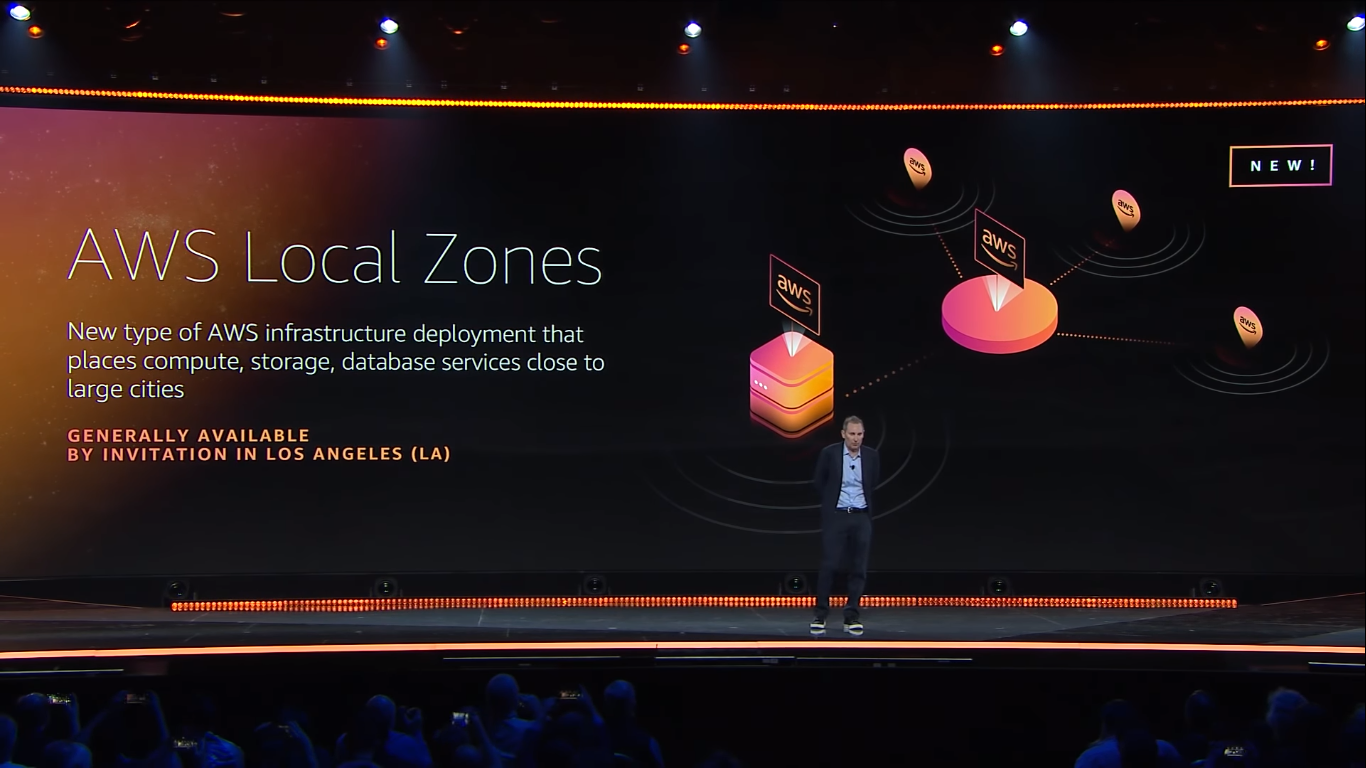 5G technology promises to change everything in terms of speed – the fastest. AWS partnered with various telecom providers, the most prominent one among them is Verizon. AWS Wavelength delivers single-digit latency to mobile devices and users with AWS compute and storage at the edge of the 5G networks. 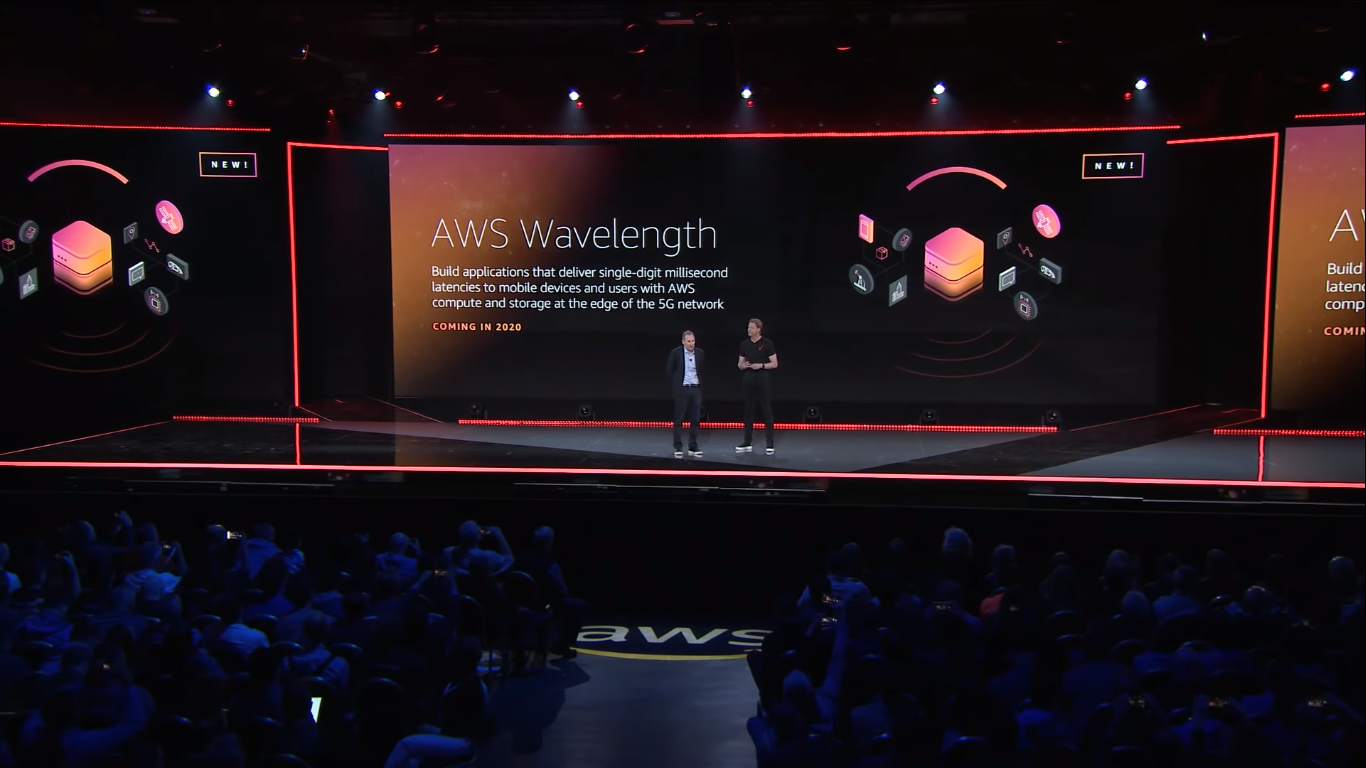 Organizations have incorporated Machine Learning models in their modern-day software and applications. AWS makes it easy for all such organizations to run M/L models by offering all the major frameworks, i.e., TensorFlow, PyTorch, and mxnet. Over 50+ capabilities added to SageMaker, in the past year alone, are not still enough for customers to gain visibility into their ML models. Andy Jassy announced the following additions to SageMaker to improve the overall performance of running machine learning models on AWS infrastructure.

It is a first web-based fully integrated development environment for machine learning workflows. It allows developers to build, train, tune and deploy their models from a single interface. 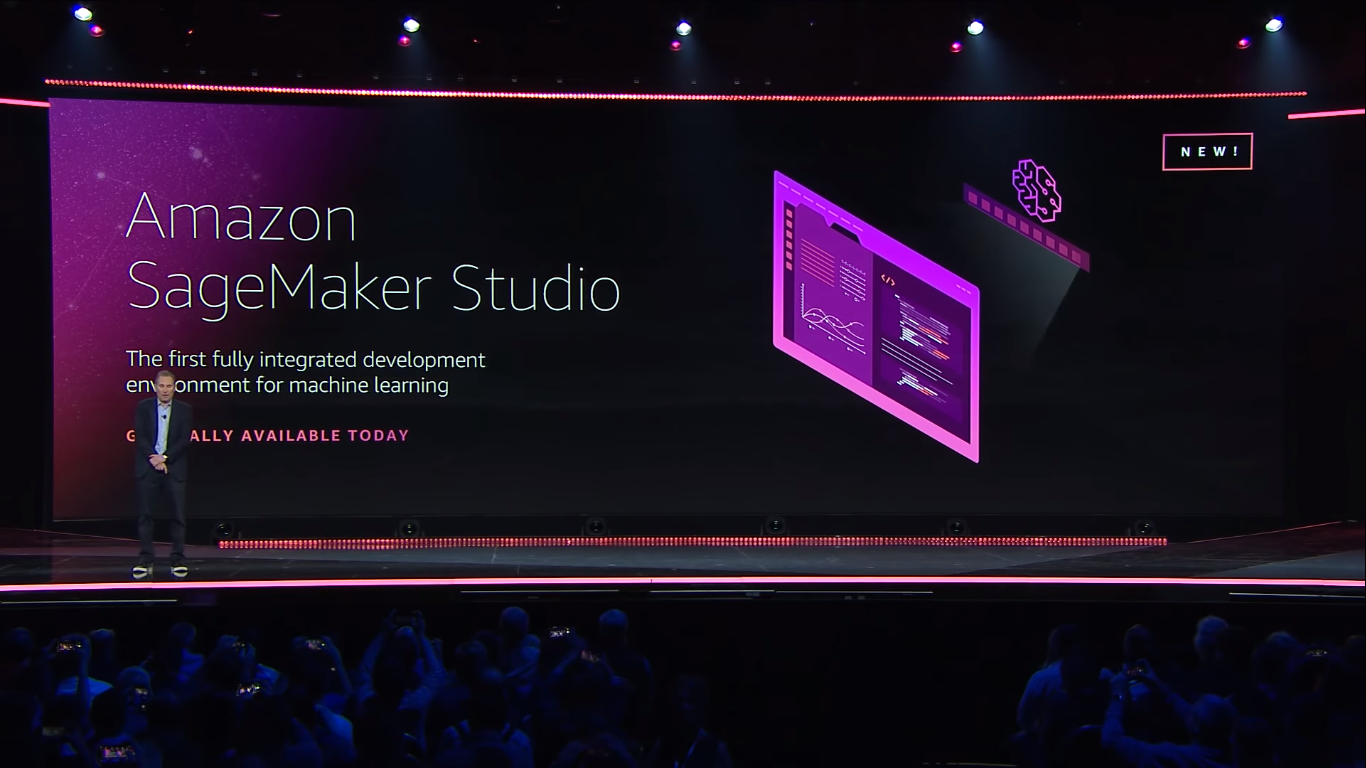 Notebooks, in general, are an integral component when it comes to machine learning. With notebooks, one can easily write, copy and run the codes, deduce outcomes and visualize data. Developers build, iterate and experiment with different M/L models, which is again time-consuming. Amazon SageMaker Experiments capture, organize and search every step of building, training, and tuning your models, that too automatically. 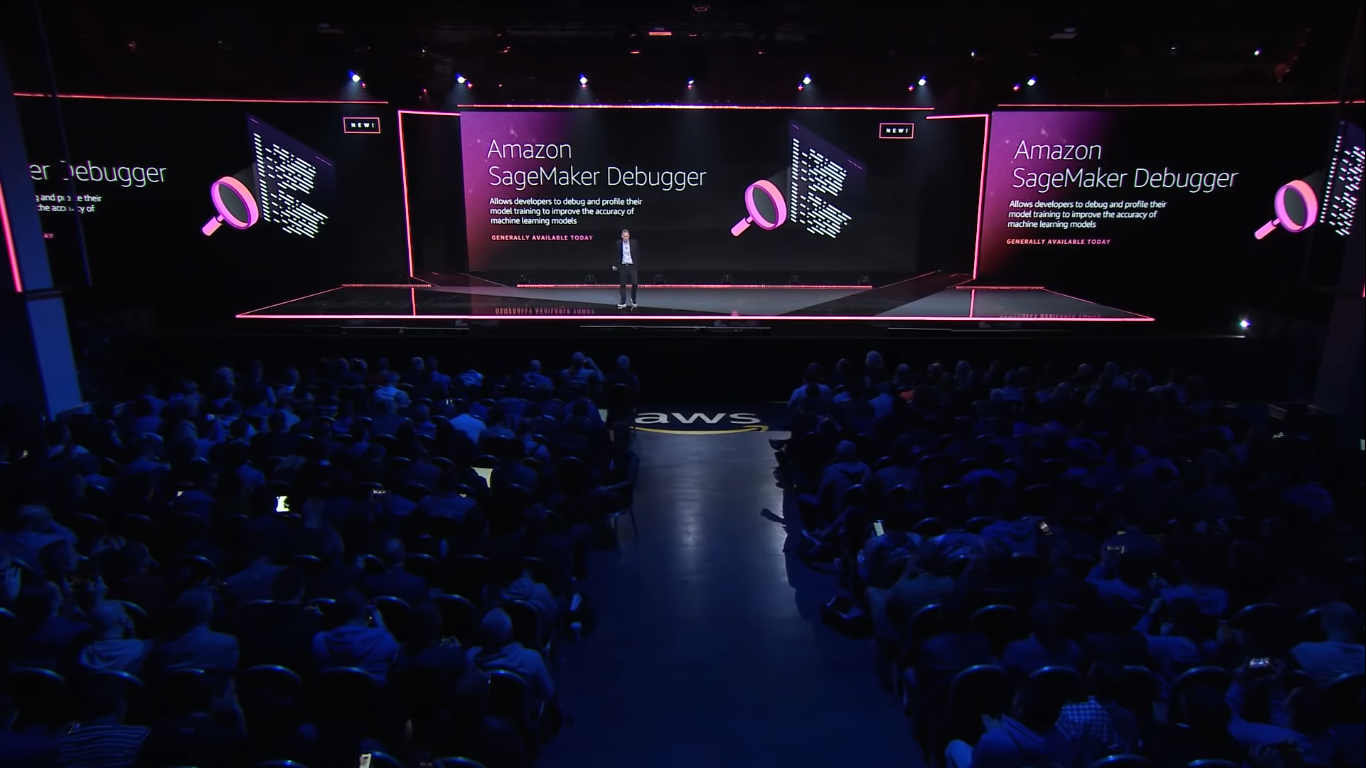 Andy Jassy announced the general availability of Amazon SageMaker Model Monitor which helps you detect concept drift by monitoring models deployed to production that too automatically. You can enable the Model Monitor with a single click. Automating M/L models can be the next big thing. This is what AWS is trying to do with Amazon SageMaker Autopilot. It equips developers with the ability to automate machine learning with full control and visibility. Amazon being the eCommerce giant are leveraging various practices for fraud detection. Andy Jassy announced Amazon Fraud Detector – a new machine learning-driven fraud management service. Organizations using this may not need to set-up a team with the machine learning experience, in other words, it’s easy to use. Coding is a basic thing when it comes to developing applications, software or trying to run anything on computers. But it becomes complex when the applications are tricky. AWS announced Amazon CodeGuru, which is a new machine learning service to automate code reviews and identify your most expensive line of code. Contact Lens for Amazon Connect can analyze call logs and identify useful insights such as emotions and sentiments, recognize and flag long periods of silence, and note when people are talking over each other. Organizations can understand the state of call centers to improve the customer service process.

After announcing service to transcribe and analyze the call logs, a question arises that “Can same machine learning search services be applied to help large enterprises improve the enterprise searches into the FAQs, documents, etc.?” Andy Jassy answered this with Amazon Kendra. It can easily pull data from different silos across your organization such as Sharepoint, ServiceNow, HDD, etc, which is later sync and indexed using machine learning for quicker internal search.

AWS re:Invent 2019 had everything enhanced computing power announcements, Machine Learning, Big Data, and 5G. Not only this, Andy presented an exclusive checklist focused on transformation. The checklist addresses the biggest roadblocks and how to overcome those. Subscribe to CMI blog here, to read an exclusive article on “Digital Transformation Checklist: A note for Leadership by Andy Jassy.“