Is Amazon loosing its cloud crown to Microsoft?

Is Amazon’s cloud dominance at stake?

The company released its second-quarter earnings recently, and the data by Amazon Web Services (AWS) shows a generated revenue of $8.38 billion in the quarter. The number registered a jump of 35% over the same quarter last year. Q2 2019 for Amazon came with mixed results as the stock price also fell down.

Analysts were expecting AWS to generate close to $8.48 billion this quarter, which could not be met but – one of the key factors in the stock price fall. Amazon might have never imagined these series of events for its cloud business. On the other hand, Azure cloud services made a return of over $11 billion in Q2 2019, which is 19% higher than the same quarter last year.

Amazon initially started the cloud services to support its infrastructure but became the most formidable revenue business for the company.

The cloud crown is entitled to Amazon for a long time, but it seems to relinquish this crown to its closest competitor, Microsoft.
AWS is still growing, no doubt in that, but at a diminishing rate as compared to the last few quarters. For Amazon Web Services, the record profit streak of four straight quarters came to an end after hovering around 40% growth year-over-year for several quarters. 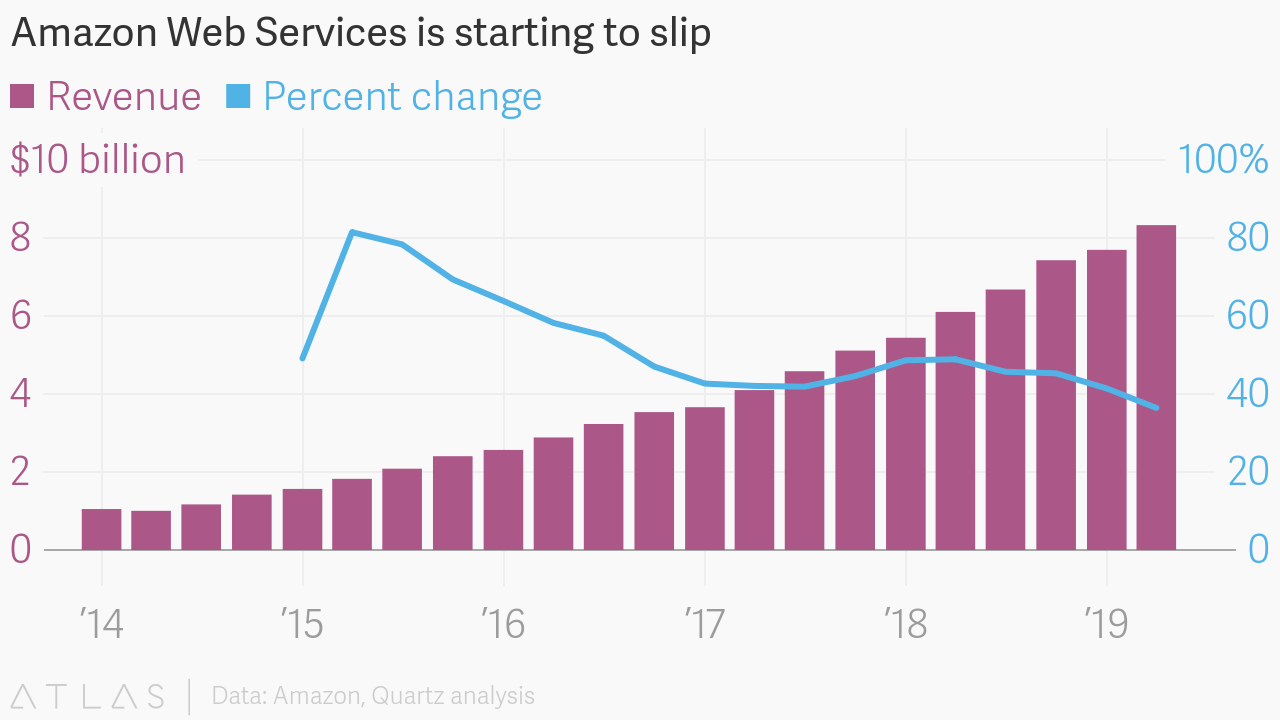 Amazon’s CFO, Brian Olsavsky, in an interview with MarketWatch, said — “It does create a shock to the system, we’re working through that now, and we expect we will be working to that for a number of quarters, but when the dust settles, we will regain our cost efficiency over time.”

It’s a tight competition with various other competitors joining the race. Alphabet, this year, reported its Q2 earnings with Google Cloud’s revenue share standing at $6.2 billion. Google Cloud Platform’s (GCP) revenue is not as big as compared to Amazon or Microsoft, but the scenario is dynamic because a few years ago Microsoft’s cloud business also seemed equally tiny, but we are witnessing the most significant turnaround in the cloud domain.

Amazon and Microsoft both are striving for cut-throat deals with all the big and recognized brands. Microsoft might not be the only player with recent long-term cloud deals.

Apple’s cloud expenses on AWS are no more a secret. The company spends more than $30 million every month, which makes it $360 million per year.

Lyft, the ride-hailing company, filed the IPO prospectus in March 2019 – in which they committed to spending at least $300 million on Amazon Web Services from 2019 to 2021, i.e., $80 million every year. Lyft’s bitter rival, Uber, is also an AWS customer.

Slack also made a hefty commitment to spend money on AWS. In 2018, Slack signed a $50 million per year deal for over five years. Slack said it uses AWS for its “processing and delivery infrastructure.”

Pinterest, in its IPO filing, has committed to spending a minimum of $750 million on AWS over the course of six years by 2023. This deal with Pinterest is in the best of AWS’ interest because they need more long-term cloud deals to keep the lead from other competitors.

AWS has already announced its entry into the hybrid cloud infrastructure market, which is the ‘next big thing’ for cloud users. AWS plans to do this with AWS Outposts, which will be available by the end of this year. Following AWS’s path, Microsoft also planned Azure Stacks for hybrid cloud computing. Until this year, AWS was leading by huge margins, be it in terms of revenue, profit, sales everything.

If AWS slips at the same rate for another one or two quarters, we will see the market share shifting towards Microsoft. AWS always had the advantage of being the first cloud player which gave them a head start but now they have to retain that stature by competing with the changing dynamics of the industry.