The $3 billion cloud services arm of Alibaba Group Holding Ltd. is fast becoming an important driver of its global expansion.

According to Gartner, the e-commerce giant expanded its lead over Amazon.com Inc. and Microsoft Corp. in Asia’s 2018 cloud computing market; which in turn helped to narrow its global gap with these two rivals. That helps Alibaba advance billionaire co-founder Jack Ma’s vision of earning half of its revenue outside China.

Alibaba’s overseas cloud expansion will continue to outpace its domestic growth as the company pushes further into other countries”
Lancelot Guo, Alibaba Cloud’s vice president and head of strategy.

Global cloud providers – AWS, Google, IBM, and Microsoft – have been active in Asia-Pacific; many providers are competing for a share of the market.

Alibaba Cloud, in particular, is a force to be reckoned with. It has established a leading position in China, with almost 50% of the infrastructure-as-a-service (IaaS) market share.

China has nearly three times the number of Internet users compared to the US; which speaks volumes about its ability to scale.

In addition to this, Alibaba Cloud has a strong presence in several industries within China; including retail, e-commerce, government, logistics, manufacturing, and banking. The company offers over 240 vertical solutions that can potentially be rolled out globally. The company works with a DevOps culture and speed.

It is not unusual for the provider to add 300 new products or features within one quarter. (In 2018)

The company now places bets in some emerging markets as well like India, Malaysia, and Indonesia; while competing with others in developed markets like Hong Kong, Japan, Singapore, and Australia.

It aims to establish up to 10,000 partners globally and has partnerships with Vodafone, Singtel, PCCW, Data Pipe, TIME, Indonet, and SK Telecom.

Alibaba Cloud started its journey from Singapore with eight local partners to launch a landmark China Gateway Program. This program leverages Alibaba Cloud’s accumulated knowledge and experience; which has driven the growth of Alibaba Group to help capture and capitalize on growth opportunities for local businesses in Asia and China. Alibaba Cloud will provide companies of all sizes with an in-depth immersion program to do business in China through local partners in Singapore and around the region; connecting them to Chinese companies and consumers through the Alibaba ecosystem.

India is the key market for Alibaba cloud

Alibaba Cloud is the active enterprise in India and has aggressively supported Indian startups, such as Paytm, Zomato, BigBasket, DLF Shopping Malls, Snapdeal, etc., as a result of growth in investment and talent.

Gartner estimates that Alibaba last year accounted for 19.6 percent of Asia’s market for infrastructure as a service and infrastructure utility services, the two most popular forms of cloud business. This means that from 2017, its regional market share increased by almost a third, while Amazon’s fell slightly to 11 percent. ( Globally, Amazon leads the pack with 30.4 percent to Alibaba’s 4.9 percent.) 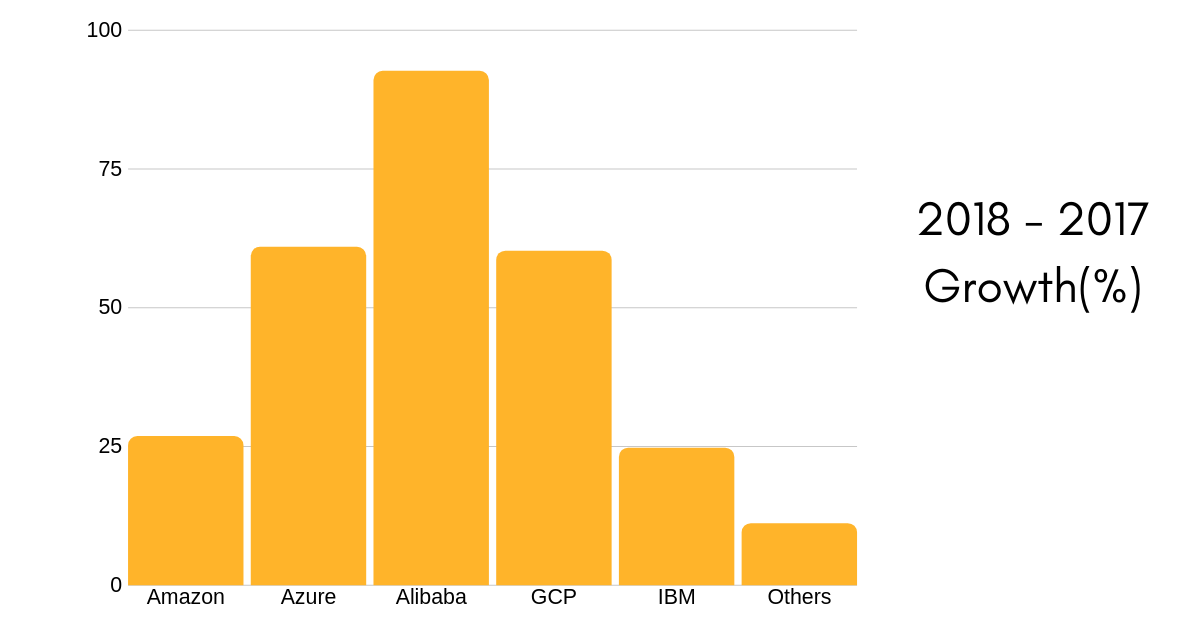 IaaS and the derived IUS are the server storage network for all products on the Internet; but the mass might not use these. However, it is a must-have for all companies that run websites. By providing IaaS solutions, Alibaba Cloud can introduce its Alibaba ecosystem to the local internet market. Although Alibaba is not ranked top 5 in either PaaS or SaaS, its PaaS and SaaS business is developing. Earlier this year, they introduced the SaaS accelerator for developers within their ecosystem.

Alibaba Cloud is comprehensive and capable of dealing with heavy traffic. The Chun Yun and 11.11 Shopping Festival always introduce heavy traffic to servers, and Alibaba Cloud has not failed once to support the sudden flows of traffic.

As the No.1 in a global environment, Alibaba is focused on surrounding regions and where AWS and Azure haven’t occupied yet. With the price advantage and the local emerging internet market, the expansion of Alibaba Cloud will be smoother and more deep-rooted.