As per the latest report from Synergy Research Group reveals the number of data center-oriented M&A deals signed in 2019, and for the first time, it crosses 100 mark.

It was 6 percent higher than in 2018, and more than double the number of deals closed in 2016. The market saw a total of 350 deals (approximately) closed while specifically talking about Data Center M&A. One utter change that happened in 2019 was the dramatic 50% increase in private equity deals and more than offset by a sharp 45% drop in M&A deals closed by public companies.

Moreover, the deal volume also increased in 2019; however, the aggregate value of those deals decreased due to a reduction of 24 percent in the average value of the deal; following a similar trend seen in 2018. In 2017, the average deal value peaked thanks to three multi-billion dollar deals and three more worth more than one billion dollars each. The number of billion-dollar deals failed in 2018 and again in 2019. 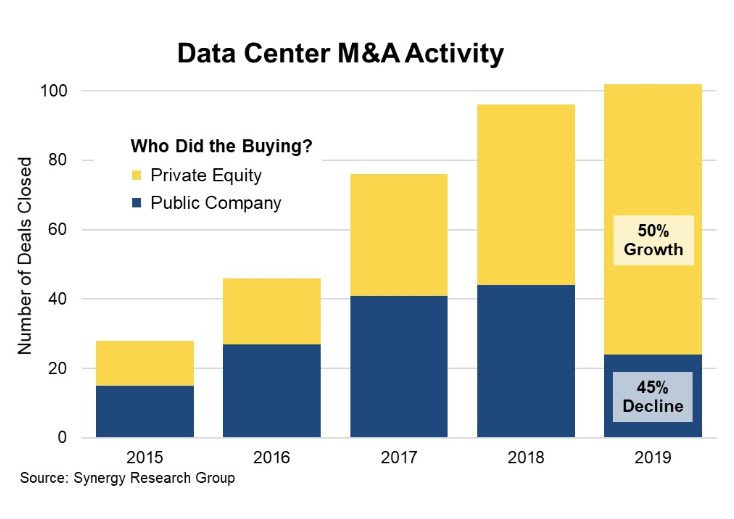 From the start of 2015, Synergy has identified 348 signed deals with a compiled value of $75 billion. Over the last half-decade, the aggregated deal value has been split roughly; but equally between public companies and private equity buyers. In contrast, private equity buyers have accounted for 57% of the deal volume.

Read More: Why are traditional data warehouses on the verge of extinction?

Since 2015, the most substantial deals to be concluded are the acquisition of DuPont Fabros by Digital Realty; the acquisition of Verizon’s data centers, and Telecity by Equinix. Over the period 2015-19, Digital Realty and Equinix are the two world’s leading investment providers. To sum up, they account for 31 percent of total deal value over the period. Digital Realty also has a pending agreement to acquire Interxion in what would be the largest ever data center transaction. Other notable data center operators that have been serial acquirers include CyrusOne, Iron Mountain, Digital Bridge/DataBank, NTT, GI Partners, Carter Validus, GDS, QTS, and Keppel.

Why there is such a hike in the numbers?

“The aggressive growth of cloud services and outsourcing trends more generally are fueling a drive for scale and geographic reach among data center operators, which in turn is stimulating data center M&A activities,” said John Dinsdale, a Chief Analyst at Synergy Research Group. “This has been attracting an ever-increasing level of private equity activity as investors seek to benefit from high-value; and strategically important data center assets. It is also notable that even the biggest publicly traded data center operators are increasingly turning to joint ventures; with external investors to help fund growth and protect balance sheets.”

The staggering numbers are driven by the rapid increase in cloud adoption; which in turn fuels the demand for data centers needed to meet that “rapid increase”.

Facebook
Twitter
Linkedin
Previous articleWhy should you be at next – CMI Co:NEXT?
Next articleTop 10 open-source monitoring tools for Kubernetes